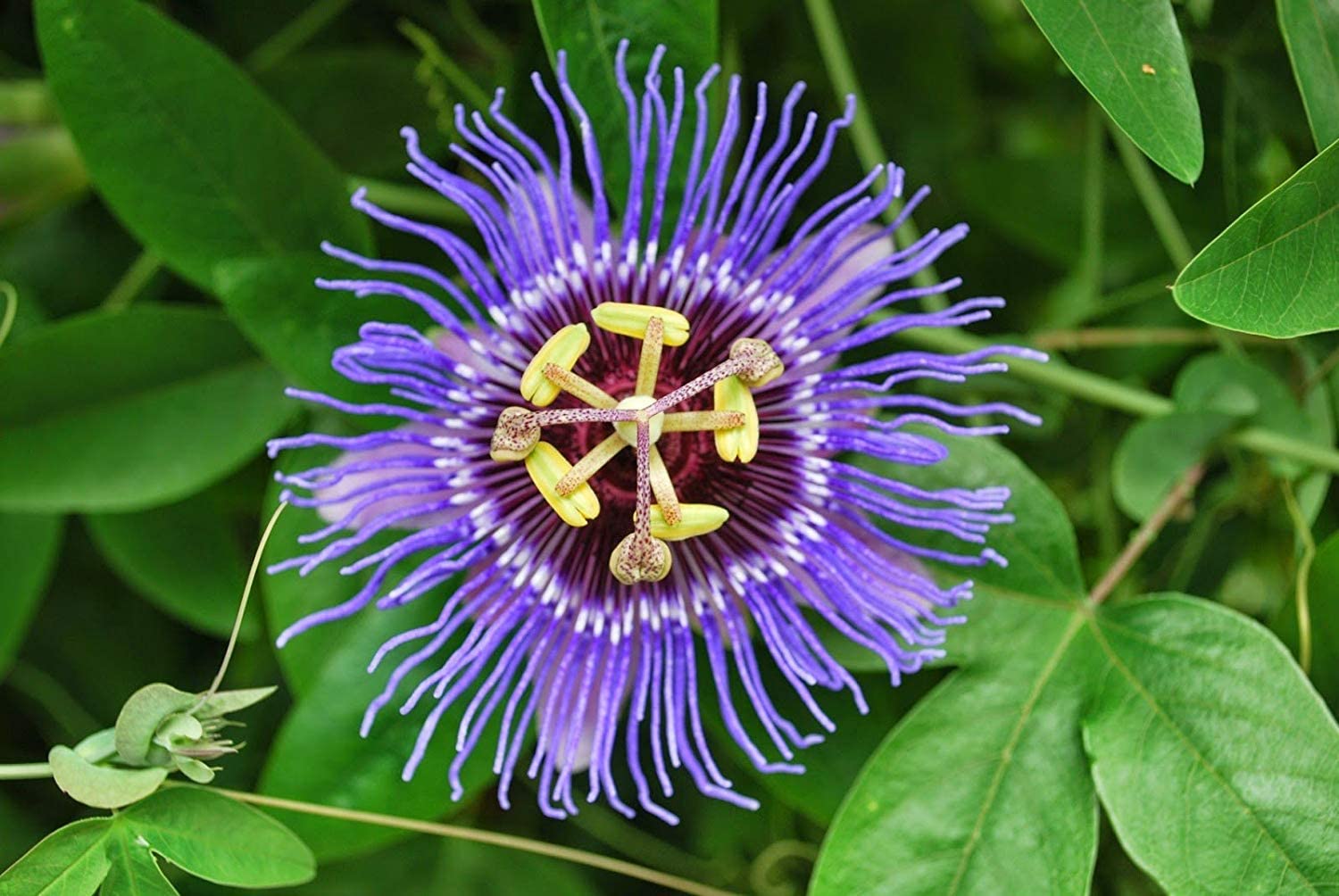 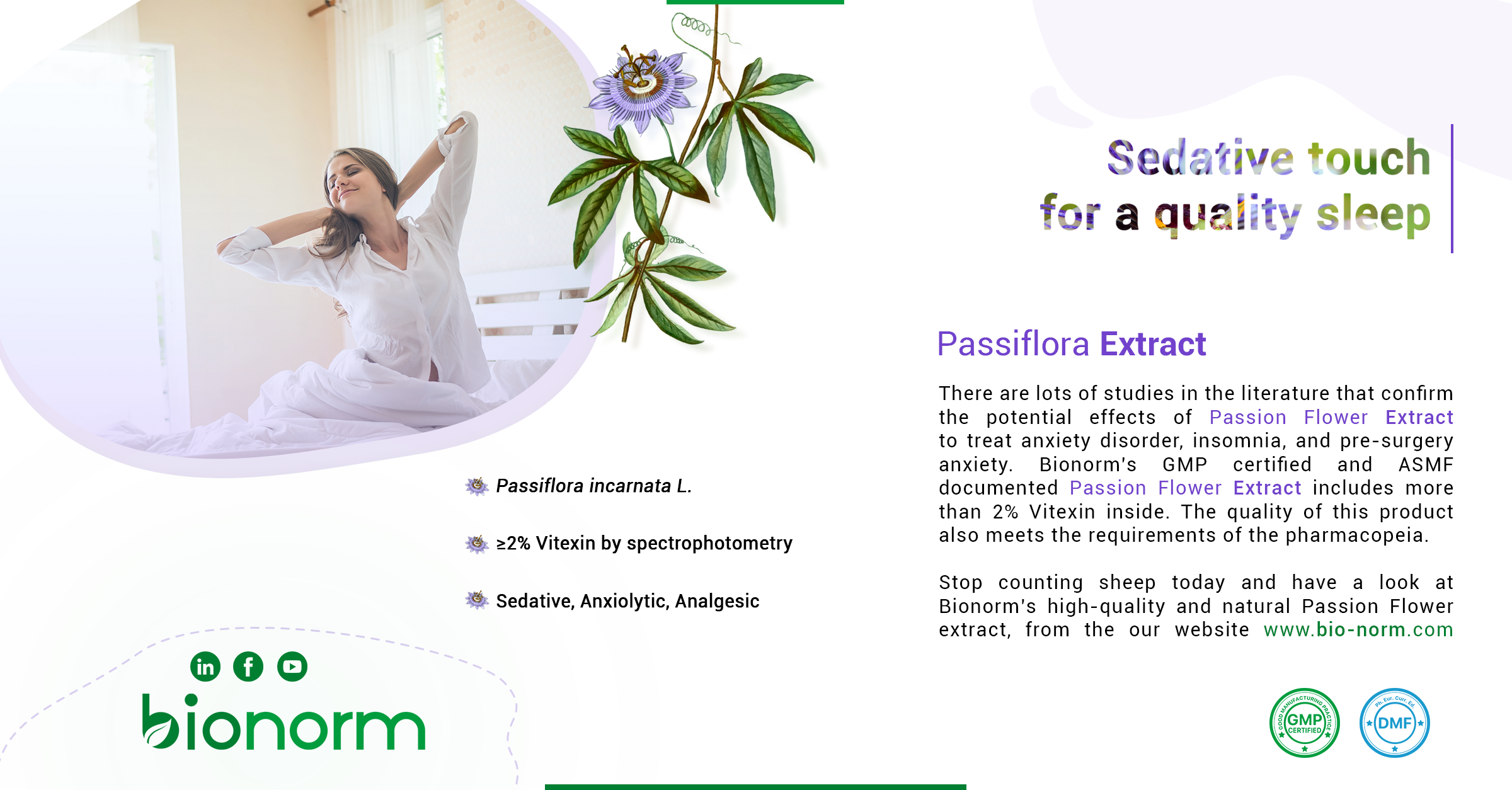 Passiflora Flower Extract (Passionflower) belongs to a family called Passifloraceae that has 500 known species. This plant is known as a rapid-growing vine that climbs by axillary tendrils. It has very long thick, and fleshy roots that bear many vertically striped shoots that can grow up to 10m long. The leaves have three deep lobes and single serrated edges. Passiflora Flower Extract can found along roads, woodland edges, meadows, and stream barks in nature. Under optimum growing conditions, it covers large areas by spreading root suckers. It is also known as maypop due to the loud sound created when the fruits stepped on. Passiflora Flower Extract blooms in summer and gives fruit in late summer or fall.

Sleep is a crucial action required for humans constituted by two different stages, known as Rapid Eye Movement (REM) and Non-REM (Slow Wave Sleep). Due to the external and internal factors, both sleeping stages may be disturbed, affecting a person’s regular sleeping pattern. Sleep disturbance is known as insomnia, which can cause an increase in inducing serious troubles of public health. Due to this situation, researchers seek molecules from nature to cope with insomnia. There are many hypnotic drugs to cope with this situation, but those exhibit severe side effects. For example, the most recent hypnotic drugs found in the 80s are known as non-benzodiazepine drugs. However, these non-benzodiazepine drugs have shown side effects like hallucinations, amnesia, depression, and sleepwalking problems. These results have led researchers to find an alternative approach, such as phytotherapeutic agents obtained from nature. (1) The plant Passiflora Flower Extract (Passionflower) used for a long time for its sedative effects in history. Native Americans have used this plant to treat wounds, earaches, liver problems, and boils. In Europe, it has used to treat restlessness and agitation. Moreover, in the studies, the extract of the plant Passiflora Flower Extract has shown neuropharmacological activity. (2) Today, Passiflora extract is known as a traditional herbal medicinal product for relief of mild symptoms of mental stress and mood disorders, along with sleep disorders and temporary insomnia to aid sleep.

In the literature, there are many studies about the effects of Passiflora extract (Passioflower extract). In one preclinical study, aqueous extracts of this plant’s aerial parts were examined in mice to understand behavioral effects. Both anxiolytic and sedative properties of the extracts have been confirmed in that study. Moreover, it has shown that the aqueous extract of Passiflora Flower Extract has induced sleep in mice in the same research. (3) In one clinical study, the herbal tea of Passiflora Flower Extract (Passionflower) has been tested on the human to understand its efficacy on human sleep. In the study, the placebo control was also made to validate the accuracy of the results. Forty-one participants aged 18-35 years consumed tea and completed a sleep diary for seven days. These participants also fulfilled Spielberger’s state-trait anxiety inventory on the seventh day. As a result of this study, it was seen that even with the consumption of a low dose of herbal tea of Passiflora Flower Extract, the sleep quality of the healthy adults mildly increased. (4) In another clinical study, 60 participants aged 25-55 years who were scheduled for spinal anesthesia were selected. Before the anesthesia, all the required scores, such as sedation and psychomotor function test, were measured. Two groups were arranged, and one group was given Passiflora extract orally while the other group was given a placebo. As a result of this study, before the spinal anesthesia, the group that has taken Passiflora extract had lower anxiety than the placebo group. (5) To conclude, most of the studies, such as above, confirm the potential effects of Passiflora extract to treat anxiety disorder, insomnia, and pre-surgery anxiety.

The extract of Passiflora Flower Extract (Passionflower) contains vitexin, isovitexin, and their c-glycosides, kaempferol, quercetin, and rutin; indole alkaloids, mainly harman, harmaline, harmine; coumarin derivatives; cyanogenic glycosides (gynocardin); amino acids (including GABA); fatty acids (linoleic and linolenic); gum; maltol; phytosterols (stigmasterol); sugars (sucrose); and a trace of volatile oil. The main content vitexin believed to has pharmacological activities such as anti-depressant-like actions, anti-AD, anti-nociceptive and anti-hypertensive activities. On the other side, isovitexin, an isomer of vitexin, has proved to have anti-inflammatory and antioxidant properties. Bionorm’s Passiflora Flower Extract (Passionflower) Extract includes more than 2% Vitexin inside. The quality of this product also meets the requirements of the pharmacopeia. To have more information about Bionorm’s passionflower extract, check the link.